Poros - Πόρος, the ancient Kalureia, lies south-west of the Methana Peninsula, separated from the north coast of the Argolid by a strait between 250 m and 1000 m wide, 1.5 km long and up to 4 meters deep. 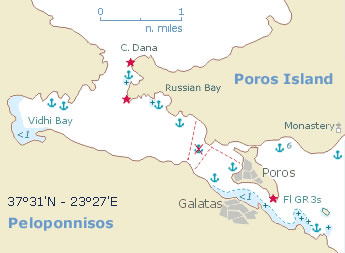 Most of the island is covered with thin woodland and macchia. The inhabitants, many of whom are of Albanian descent, live by farming the fertile coastal areas on the mainland which belong to Poros and, increasingly, by the tourist trade. There was a settlement in Mycenaean times on the site later occupied by the Sanctuary of Poseidon. The ancient city was abandoned after the Roman period, and the modern town was established only in the late Middle Ages. British Admiralty Chart 1599 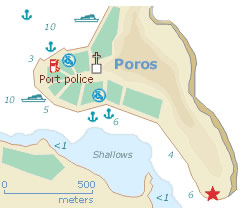 The island’s capital, Poros (pop. 4300; naval training school), is beautifully situated on ancient Sphairia, a promontory of volcanic origin on the south side of the island linked with it by the narrow Bisti Isthmus. In the 18th and 19th c. this was the principal naval harbour on the south-east coast of Greece. 5 km north-east of the town are scanty remains of the Sanctuary of Poseidon (5th c. BCE), the centre of the Kalaurian amphictyony (religious league) of the maritime cities on the Saronic and Argolic gulfs. It was here that Demosthenes, fleeing from the henchmen of the Macedonian Governor Antipatros, poisoned himself in 322 BCE. The numerous remains of buildings in the surrounding area suggest that this was the site of ancient Kalaureia. 4 km east of Poros is the 18th c. Monastery of Zoodokhos Piyi. On the mainland opposite the island lies the huge lemon grove of Lemonodasos (30,000 trees), which belongs to Poros. 10 km west, at the village of Damalas, are the scanty remains of ancient Troizen, the setting of the legend of Hyppolytos and Phaidra. Only berth on the south shore if you willing to listen to late night music from the bars along the waterfront while exposing your nose to the odours of raw sewerage. Get to Poros early and go stern-to at the north side to experience the actual beauty of Poros