Spectacular Amorgos - Αμοργός is an island of bare rocky hills 33 km long and up to 6.5 km wide. For the most part the south-east coast falls steeply down to the sea, but the north-west coast is gentler, with two deep inlets – the sheltered Katapola bay and Aegiali bay and several coves like Fjord cove, Kalofana bay and Akrotiri bay proofing that Amorgos should be included in itineraries on a sailing holiday. The population – much reduced by emigration – lives by farming and fishing. Ferries are not frequent, which explains the surprising low numbers of tourists. 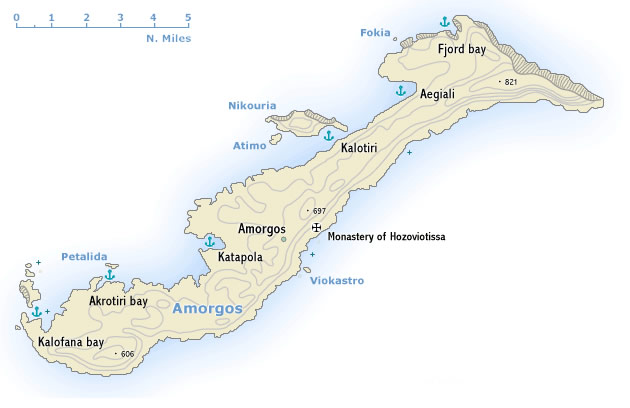 The remains of several ancient cities, extensive cemetery areas, finds of coins and rock inscriptions bear witness to the importance of the island in Minoan and Hellenistic times as a port of call on the sea route between Milos and the south-eastern Aegean. Used in Roman times as a place of exile and in subsequent centuries frequently harried by pirates, Amorgos has remained since then an island of no economic or political importance and has in consequence retained much of its distinctive character.

Amorgos (Chora), the chief place on the island, is situated on the slopes of a hill, huddling round a ruined 13th c. Venetian castle with its typical whitewashed Cycladic houses, its many barrel-vaulted family churches and its windmills. From the town it is a half-hour walk (or donkey-ride) to the Byzantine Monastery of Panayia Hozoviotissa (1088), clinging to a sheer rock face at a height of 367 m. From the lower terrace there is a magnificent view over the sea. Opposite on the west coast of the island is Katapola, the main port.

At the south end of the island, at the pretty village of Arkesini, is the site of Kastri, with remains of a settlement occupied from Myceanaean to Roman times. At the north, near Aegiali port, are traces of a settlement by Milesians. From here there is a very rewarding climb to the summit of Mount Krikelos (821 m), the highest point of the island.