The island of Melos - Milos - Μήλος, the most westerly of the larger Cyclades, owes its distinctive topography and the pattern of its economy to its origin as the caldera of a volcano of the Pliocene period, to which the sulphurous hot springs in the north-east and south-east of the island still bear witness.

It has one of the best harbours in the Mediterranean, formed when the sea broke into the crater through a gap on its north-west side. The north-eastern half of the island is flatter and more fertile than the upland region in the south-west, which rises to 752 m in Mount Profitis Ilias. The island’s principal sources of income – besides the tourists either on a sailing holiday or island hopping by ferry – are its rich mineral resources, including pumice, alum, sulphur and clay. Kimolos - Κίμωλος is an arid and inhospitable island of volcanic origin lying, which was known in antiquity for its terra kimolia (cimolith), used both as a detergent and in medical baths.The chief place on the island, Kimolos, lies near the sheltered port of Psathi, round the remains of the late medieval settlement of Kastro. On the island’s highest point is the ruined medieval Castle of Palaiokastro. 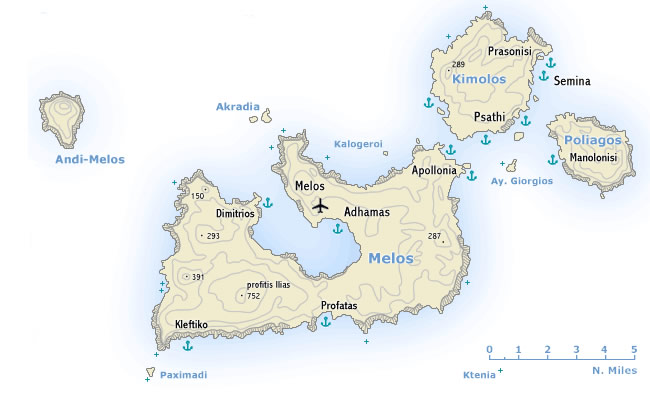 The island of Milos was already densely populated in the 3rd millennium BCE, when the inhabitants made implements and weapons from the large local deposits of obsidian and exported them all over the Aegean and as far afield as Asia Minor and Egypt. About 1200 BCE Dorian incomers settled on the island and founded the city of Melos, defended by walls and towers, on a hill on the north side of Milos Bay. They prospered through the export of sulphur, pumice, clay and alum, and also of oil, wine and honey.

In Roman and Early Christian times Milos was also a notable art centre. Its best known work is the Aphrodite of Melos or Venus de Milo (2nd c. BCE), now in the Louvre.After the fall of the Roman Empire Milos became Byzantine; in the Middle Ages it belonged to the Venetian Duchy of Naxos; and after centuries of Turkish rule it became part of the newly established kingdom of Greece.