The bare rocky island of Mykonos - Μύκονος was once one of the most important trading centres in the western Aegean. Its arid and only moderately fertile soil permits only a modest development of agriculture, but its beautiful beaches have made it one of the most popular holiday islands in the Aegean. Indeed, the new marina port is growing in popularity and is actually becoming a small charter base from which you can hire charter yachts to start your sailing holiday. Moreover, it has a flourishing craft industry and Mykonos is also the starting point from which to visit the neighbouring island of Delos.

Delos - Δήλος, is likewise a rocky island and lies 5 nm south-west of Mykonos and it is one of the smallest of the Cyclades. Yet, Apollo was born on Delos and the island was therefore of great importance in antiquity. Indeed, the Cyclades were so called because they were seen as lying in a circle (kyklos) round this sacred island.

The extensive area of remains excavated under the direction of French archaeologists from 1873 onwards is one of the most important archaeological sites in Greece.
East of Mykonos lies the rocky island of Tragonisi or Dragonisi, with sea-caves frequented by seals. 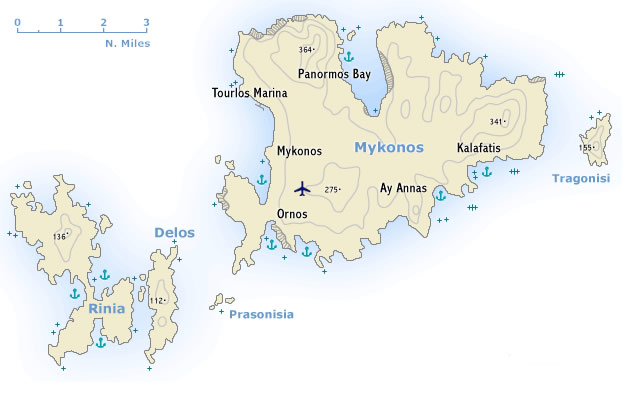 According to legend Mykonos was the rock with which Poseidon slew the giants. The island’s history was closely bound up with that of Tinos. Unlike Tinos, however, it was occupied by the Turks, though it contrived to maintain a considerable degree of independence under Turkish rule.

According to the ancient myth Delos (Dilos) was the birthplace of Apollo and Artemis. The destinies of the island turned on its importance as a pan-Hellenic shrine.

The earliest settlers on Delos, in the 3rd millennium BCE, were Phoenicians and Carians. After their displacement by Ionians in the 1st millennium BCE the island became the main centre of the cult of Apollo, and splendid games – said to have been originally established by Theseus – were held annually in honour of the god. In the 6th c. BCE Peisistratos carried out a purification (catharsis) of the island by removing all tombs from the area round the sanctuary, and in a second purification in 426-425 BCE all births, deaths and burials on the island were prohibited and the existing tombs were removed to the neighbouring island of Rinia (Rhinia). When the Panionic League was founded after the Persian Wars, the Temple of Apollo was selected as the treasury of the League. In 454 BCE, however, Athens carried off the contents of the treasury and reduced Delos and the other islands to a condition of dependence. In 314 BCE Delos asserted its independence of Athens and thereafter developed a prosperous trade which made it the economic centre of the archipelago. Foreign trading guilds including the Hermaists (Roman) and the Poseidoniasts (Syrians from Berytos, present-day Beirut) established themselves on the island.

In 166 BCE the Romans gained control of Delos, and thereafter assigned it to Athens. This brought a revival of the island’s prosperity, particularly after the destruction of Corinth. The end came with the devastation of Delos by Mithridates in 88 BCE, followed by its complete destruction by pirates in 69 BCE. Thereafter the island was almost uninhabited, and when Pausanias visited it in the 2nd c. he saw only the custodians of the deserted sanctuary. A fresh settlement was established in Christian times, but this was only a brief life.

Officially it is still forbidden for yachts to anchor off the coast of Delos, however I have seen several yachts spending the night anchored in the channel

between Delos and Rinia (south of the Remmatia Islet). Furthermore, several visitors of my website have told me that yachts are condoned, even permitted, to visit Delos till 15:00 hours when the exhibitions close. Consensus is that the Fourni Bay, 500 m further south, is the best anchorage, and for spending the night the nearby south bay on Rinia will provide good shelter from the Meltemi.

The island of Rinia is west of Delos and is also known as Megali Dilos, the ancient Reneia. After the second purification it became the burial-place for Delos.