The largest and one of the most beautiful of the Cyclades, Naxos - Νάξος, is traversed from north to south by a range of hills which fall away steeply on the east but slope down gradually on the west into fertile rolling country and well-watered plains. The hills rise to a height of 1008 m and are cut by two passes. 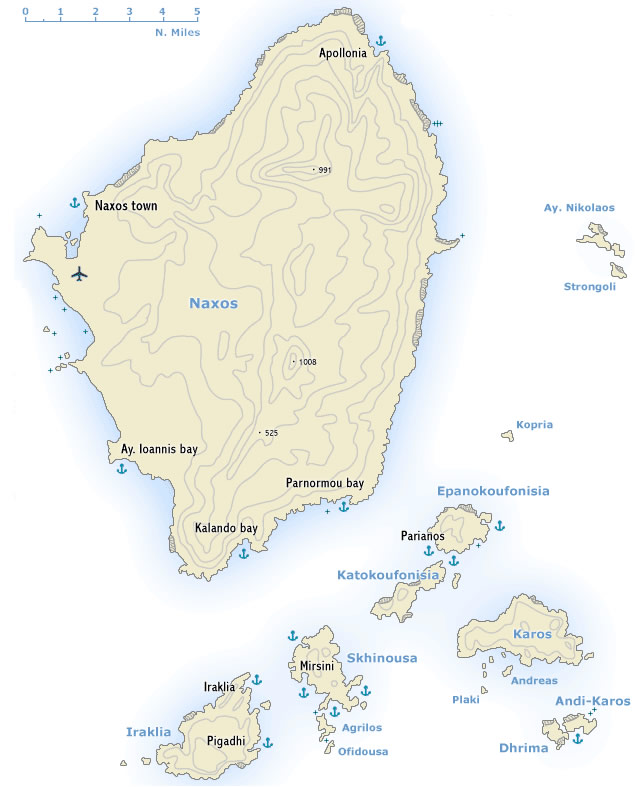 Since ancient times the economy of the island has depended on agriculture, marble-quarrying, emery-mining and the recovery of salt from the sea, occupations which have brought it a considerable degree of prosperity. In recent years the tourist trade has been an additional source of revenue.

The island is not very equipped to cope with mass tourism, but it has much to offer visiting those on a sailing holiday - an equable climate, a wide variety of scenery, from the sandy anchorages of the west coast and monuments of both antiquity and medieval periods.

Naxos was a centre of the cult of Dionysos. Mythology tells us that it was here that Theseus abandoned Ariadne.

There is much archaeological evidence to show that the island was first settled by Carians and Cretans and developed a flourishing Cycladic culture in the 3rd and 2nd millennia BCE. In the 1st millennium BCE these first settlers were followed by Ionian Greeks, who in the 6th c. BCE extended their rule over Paros, Andros and other neighbouring islands.

During this period there was a celebrated school of sculptors on Naxos, notable for such works as the colossal statue of Apollo on Delos. A member of the first Attic maritime league, Naxos became subject to Athens after an unsuccessful rising and was compelled to accept the redistribution of land on the island to Athenian citizens. After being held by Macedon it passed under Egyptian rule, was briefly assigned to Rhodes by Mark Antony and thereafter became part of the Byzantine Empire.

In 1207 Naxos was occupied by a Venetian nobleman named Marco Sanudo, who made it the centre of the Duchy of the Twelve Islands in the Aegean (Duchy of Naxos), which continued in existence until 1566 and achieved a considerable degree of prosperity. It was taken by the Turks in 1579, and was under Russian rule from 1770 to 1774, but, like the other Cyclades, retained a measure of independence. In 1830 it joined the newly established kingdom of Greece.