SUGGESTED ITINERARIES FOR THE CYCLADES

The Cyclades – Κυκλάδες lay in a circle (Greek: kyklos) around the sacred island of Delos, the birthplace of Apollo, and consists of 23 large islands and some 200 smaller ones. The archipelago is based on a submarine plateau which extends in an arc from the most easterly point of Attica and Evia towards the coast of Asia Minor. All the islands are hilly. The northern ones consist predominantly of Cretaceous limestone, micaceous schists, gneisses and marbles; those to the south consist in part of volcanic materials. 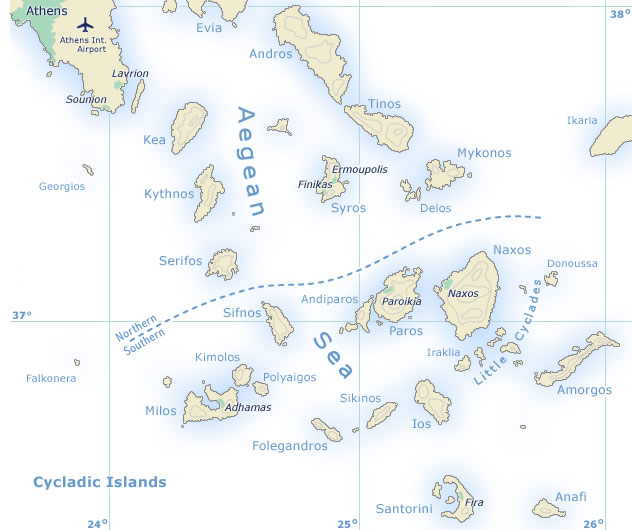 With the exception of Naxos the islands have no perennial rivers, and as a result of the prevailing sharp sea-winds (the Meltemi in summer) are lacking in trees. Characteristic features of the landscape are the cubed whitewashed Cycladic houses and the thatch-roofed windmills, very romantic and ideal for a sailing holiday.

To thoroughly enjoy the richness of the Cycladic islands you need at least 20 to 25 sailing days. But already a 2-week itinerary opens up much more possibilities, thus enabling you to see three times more than in a single week. When sailing 14 days:

The following table gives the characteristics of the Cyclades islands and you might also want to compare all the Greek regions. More dark blue stars the better.

The following routes are the result of our own travels and the vast amount of suggestions from my visitors. Similar to my Ionian or Saronic routes, these Cyclades itineraries have an “off the beaten track” character and are certainly biased towards natural beauty, sequestered anchorages and ancient archaeological sites, so perhaps not suitable for all yacht charters…

Route A
Route B

By popular demand an itinerary for one to three months in the whole Aegean of luxurious yacht charters, hence including the Dodecanese and Sporades.First of all, yacht charters of more than 3 weeks render a one-way unnecessary. Furthermore, starting (and hence also ending) in Athens is easiest with flights, etc.

Therefore, starting in Athens and after spending about 10-14 days in the Saronic and Argolic gulfs cross via Hydra to Kea or Kythnos en start exploring the Aegean.
Highlights in the Cyclades are Sifnos, Paros, Naxos & the little Cyclades, Amorgos, Santorini, Milos and Folegandros. This will be a further 2 weeks: for instance Sifnos, Santorini and Amorgos are worth more than one day!!!

Cross towards the Dodecanese from Astypalea via Kasos, Karpathos to Rhodes, Symi, and continue north to the islands of Tilos, Nisyros & Kos plus Leros & Kalymnos, Patmos, Fourni, arki & Lipso and Samos.

Sailing north means beating the prevailing winds – yet the trick of this anticlockwise route is that particularly here the winds are weakest, especially on the east (the more interesting) coasts of the dodecanese and southern sporades which are sheltered by the the myriad of Aegean islands as well as the Turkish promontories.

From the Southern Sporades of Ikaria or Chios cross back into the Cyclades to Tinos & Andros, via Mykonos & Delos, Syros, Kea and Sounion and finally the Alimos/Kalamaki marina in Athens.

You can extend this basic circle easily with extra loops:

There are several one-way routes possible in the Cyclades since Lavrion and Athens are upwind from the Cycladic main charter bases of Syros and Paros. Furthermore, the ports of Mykonos, Milosand Santorini increasingly serve as useful secundary bases for yacht charters as well. Frequent domestic flights, ferries and hydrofoils connect these islands with Athens Airport and Pireaus Port. Athens/Lavrion to Syros – 7 days